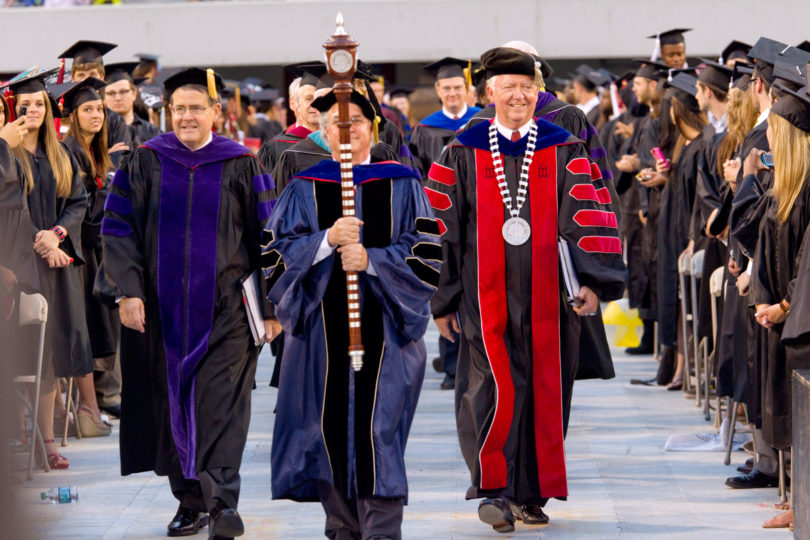 A dazzling display of fireworks over Sanford Stadium was the final and most spectacular expression of tribute paid to the accomplishments of more than 5,000 UGA degree recipients during the May 10 spring Commencement ceremonies.

On the field of Sanford Stadium, where degrees were conferred for an eligible 4,165 undergraduates, and in Stegeman Coliseum, where 915 graduate and professional candidates and 176 doctoral candidates were eligible, a message of empowerment was delivered to graduates, who now move forward to the next step in their lives beyond, or perhaps continuing at, UGA.

The 2013 Commencement ceremonies were momentous not only for the crop of students who earned their degrees, but also for the university. UGA President Michael F. Adams, who is stepping down June 30, shook the hands of graduate students walking the stage and conferred upon undergraduates their respective degrees for the last time.

U.S. Sen. Saxby Chambliss, R-Ga., the undergraduate Commencement speaker told the Class of 2013, “No matter which career you embrace or how you decide to change this world, do it with dignity, do it with passion and with a spirit of community and, above all, do it with excellence.”

With that excellence, Chambliss, who received his bachelor’s degree in business administration from UGA in 1966, challenged the graduates sitting between the hedges at Sanford Stadium to be committed to serving their country whether through military service or through a science lab, engineering firm, classroom, business or farm.

“Your challenge today is to bring sureness out of uncertainty, calm out of chaos, light out of shadows and resolution out of questions,” he said.

Members of the Class of 2013 were not the only ones recognized during Commencement activities.

The university also recognized its first African-American graduate, Mary Frances Early, who earned her master’s degree in music education in 1962, with an honorary doctorate of laws degree.

Graduate Commencement speaker ­Stephen Hajduk, head of the biochemistry and molecular biology department, told master’s and doctoral candidates to remain flexible and to make the best out of the opportunities that lie ahead.

In his address, Hajduk, a UGA alumnus, encouraged degree candidates to seek their “life’s work.” However, he warned them against laying out inflexible plans to achieve their goals.

“You shouldn’t have a script for life,” he said. “There is no such thing.”

Hajduk also told them not to torment themselves when making difficult life ­decisions.