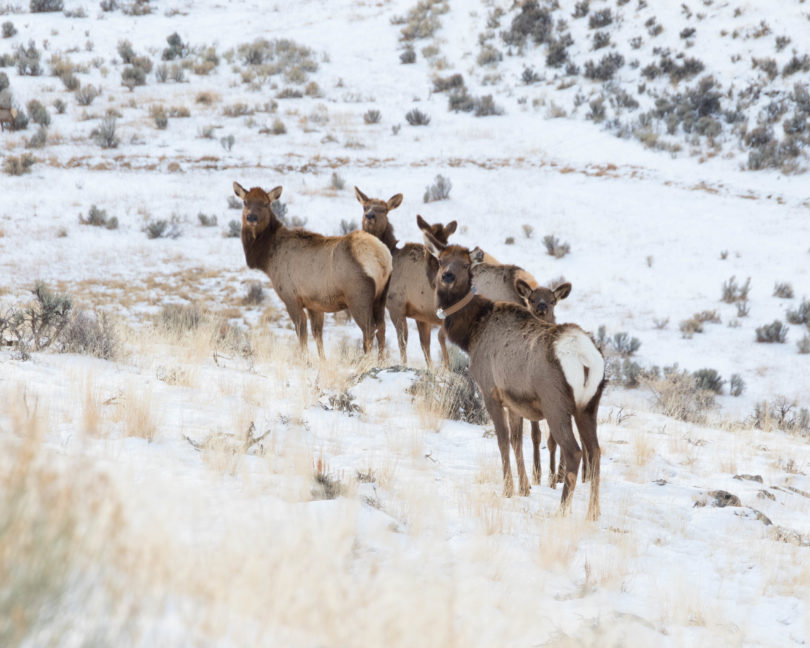 Fearing cougars more than wolves, adult female elk in northern Yellowstone National Park avoid threats from both predators by occupying "vacant hunting domains," places and times where and when neither predator hunts, according to a new study illustrating how elk can tolerate living in close proximity to both large predators. (Photo by Bonnie McDonald)

New study finds Yellowstone elk fear cougars more than wolves, but time their movements to avoid danger from both.

When we think about the relationship between predators and prey, it’s usually pretty simple: The hunted try to escape the hunters.

But a new study by a University of Georgia faculty member adds a new dimension to this relationship, incorporating both time and space to show that prey do more than simply avoid the areas where their predators hunt—at times, even going to areas where other predators hunt them.

Released last week in the journal Ecology Letters, the first-of-its-kind study looks at how the movements of elk in the northern portions of Yellowstone National Park are influenced by the hunting patterns of wolves and cougars. Findings show elk are able to avoid both predators by staying away from grasslands in the mornings and evenings—where wolves are likely to prey upon them—and steer clear of boulders and brush at night—where cougars stay ready to pounce. 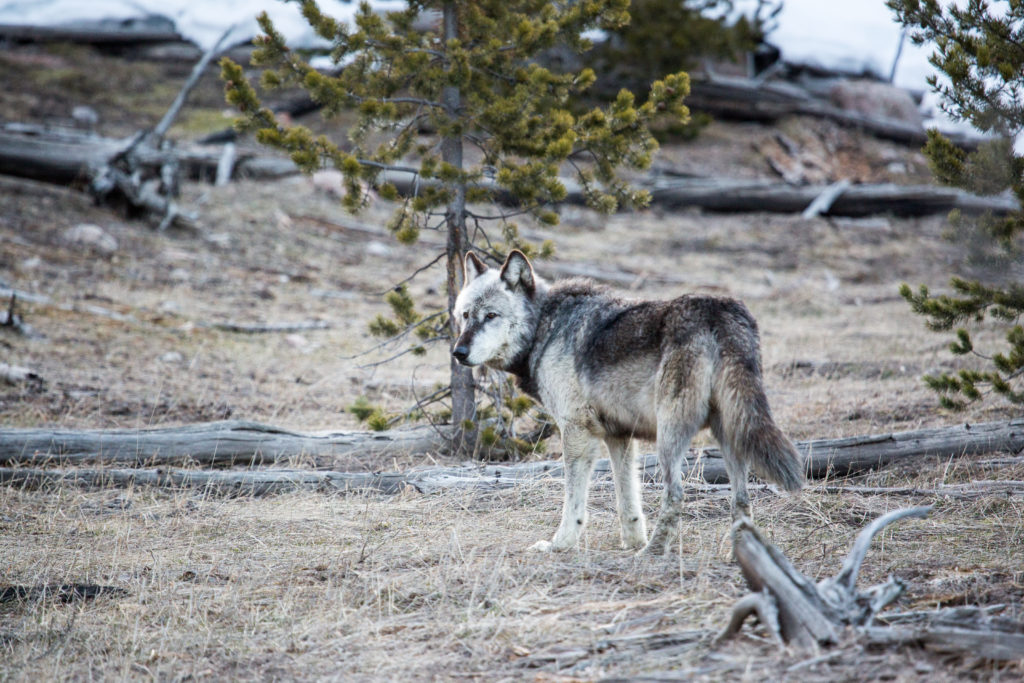 Researchers found that cougars have more influence than wolves on the movement of elk across the winter range of northern Yellowstone National Park. (Photo courtesy of Yellowstone Cougar Project/National Park Service)

Before this study, it was unclear how elk navigated the landscape, said Michel Kohl, lead author of the paper and an assistant professor in the UGA Warnell School of Forestry and Natural Resources. “When most people think about predators and prey, they think, when predators are here, the prey should go somewhere else; this was the original ‘landscape of fear’ idea,” said Kohl, citing a phrase coined in an earlier study, based in Yellowstone National Park, that investigated this relationship. “But Yellowstone is a predator-rich system, so what do you do in that situation where you can’t go anywhere else?”

Apparently, according to data collected by Kohl and his study co-authors, you move to new locations depending on the time of day.

“Cougars hunted mainly in forested, rugged areas at night, whereas wolves hunted mainly in grassy, flat areas during morning and at dusk,” said Kohl. “Elk were able to sidestep both cougars and wolves by selecting for areas outside these high-risk places and times by using the forested, rugged areas during daylight when cougars were resting, and the grassy, flat areas at night when wolves were snoozing.” 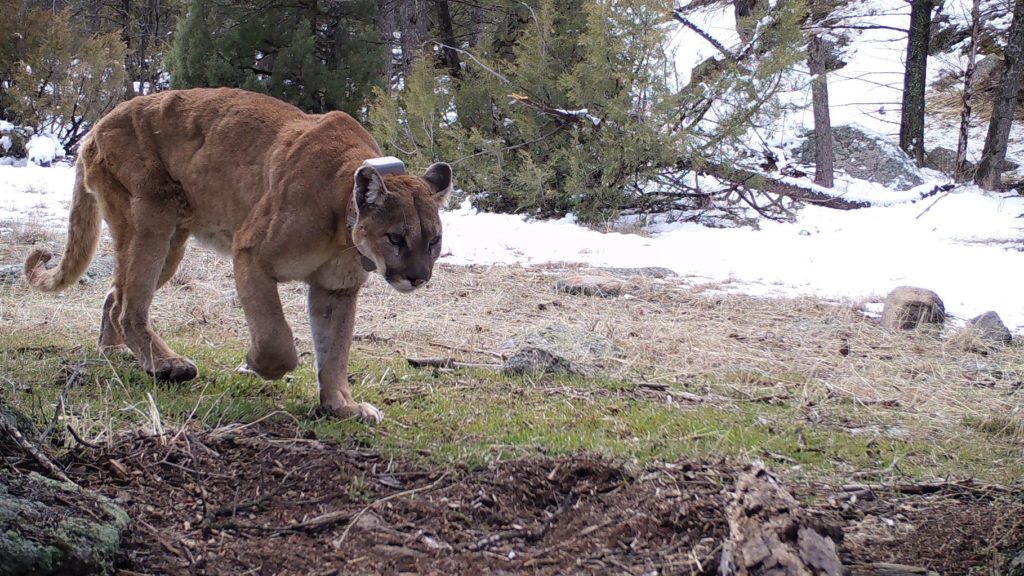 New research indicates that cougars are actually the main predator influencing the movement of elk across the winter range of northern Yellowstone National Park. (Photo courtesy of National Park Service)

The study was co-led by Kohl and Utah State University researcher Dan MacNulty, along with Toni Ruth of the Hornocker Wildlife Institute and Wildlife Conservation Society, Matt Metz of the University of Montana, and Dan Stahler, Doug Smith and P.J. White of Yellowstone National Park. The work received funding from the National Science Foundation, the Ford Foundation and Utah State University as part of Kohl’s doctoral research. The team used data collected from elk as part of Yellowstone’s wolf and elk monitoring programs and Ruth’s cougar research, which is part of a forthcoming book from the University Press of Colorado.

By tracking the animals’ movements using GPS devices, the research team saw that elk were avoiding the landscapes preferred by both cougars and wolves, but elks’ movement changed throughout the day, as if they were moving in a pattern over the landscape relative to the time of day.

This 24-hour aspect was crucial, said MacNulty. “Had we ignored predator activity across the diel, or 24-hour, cycle, we would have concluded, incorrectly, that avoiding one predator necessarily increased exposure to the other,” he said. “Recognizing that wolves and cougars hunted in different places and at different times revealed that elk selected for places and times where and when predators were least active. This allowed elk to minimize threats from both predators simultaneously.”

This is also the first study that looks at how cougars fit into the predator-prey relationship and sheds more light on the understudied and often unseen animals.

“We showed that elk are tuned into the daily movements and preferred hunting habitat of multiple carnivores,” said Ruth. “They optimize foraging and resting in habitats during times when multiple movements of carnivores wanes. While adult elk are more able to minimize risk of death from multiple carnivores, some adult elk still end up on the cougar and wolf menu, with those in poor condition during winter being more at risk.”

The research is one of several projects at Yellowstone examining the larger relationship between predators, their prey and the plant community. These relationships have become a central question within Yellowstone following the reintroduction of wolves in 1995 and 1996. At the time, some ecologists hypothesized that elk’s fear of wolves was leading to increased growth of important plant species like aspen and willows.

But the results of this study raise new questions about the true influence of wolves on elk behavior and, subsequently, the plant community. That’s because researchers found that elk were responding more strongly to cougars than wolves—counter to the popular belief that wolves are to blame for any change in the prey population. “This shows, as does other research, that cougar impacts are often not considered or are underestimated,” added Doug Smith, senior wildlife biologist for the National Parks Service and co-author of the study.

Together, these results help us further understand the Yellowstone National Park ecosystem. First, the ability of elk to avoid not only wolves, but also cougars, helps explain how elk can avoid one predator without running into the jaws of another. Second, these results help explain why elk have maintained good body condition and pregnancy rates despite the increased risk that came when wolves were reintroduced to the park. And third, the study illustrates how prey can access risky places, such as along rivers and streams, during safe times and explains why the often-referenced “trophic cascade,” or changes to the ecosystem due to predator-prey interactions, has failed to materialize in some areas of Yellowstone.

Given that most biological systems have more than one predator species, it is likely that these findings extend far beyond Yellowstone’s boundaries. “Some would argue it’s very much a completely natural system at this point,” said Kohl. “This has implications not only for Yellowstone, but for any predator-prey system.”

Betsy von Holle agreed. She is program director for the National Science Foundation’s division of environmental biology, which sees the benefits of this study reaching beyond Yellowstone’s boundaries.

“The novelty of this research is the simultaneous study of multiple predator species, revealing the complexity of predator avoidance behavior by the prey,” she said. “If we begin accounting for predator activity, we may unlock similar predator-prey relationships across the planet.”

For example, in Georgia, this can feed into our understanding of how white-tail deer use the landscape relative to predators like coyotes or humans, which could help guide management practices.

“Once we develop a better understanding for how these interactions between predators and prey play out, we can only increase our chances of massaging those interactions to meet wildlife management goals,” Kohl added. “So I think this idea of predator activity might just be one of the big pieces we have been missing.”