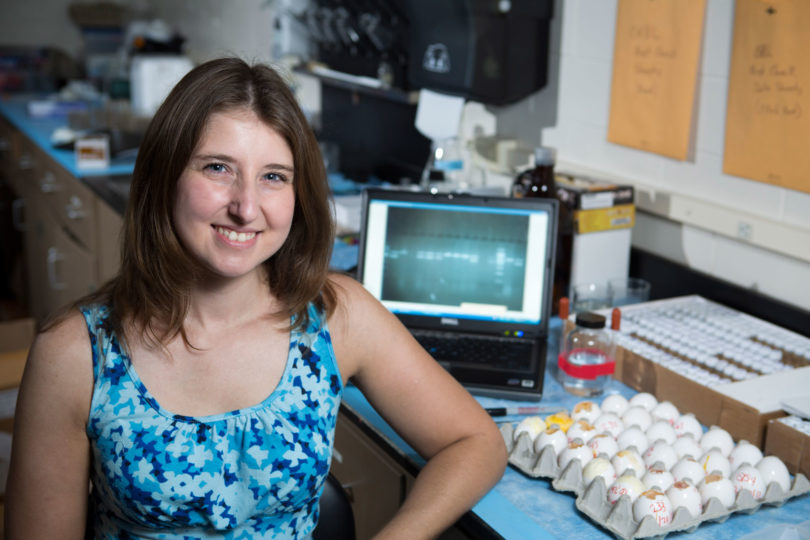 The amount of weight a woman gains during pregnancy can be vitally important-especially if she’s carrying a boy-according to a study by UGA researchers.

Kristen Navara, an associate professor in the College of Agricultural and Environmental Sciences, found that male fetuses are more likely to die if their mothers don’t gain enough weight during pregnancy.

“Fetuses are differentially susceptible to inadequate weight gain during pregnancy and that puts males more at risk, at least at certain points of gestation,” said Navara, a reproductive endocrinologist in the college’s poultry science department.

“Currently, the recommendations for weight gain in pregnancy are the same whether the fetus is male or female, even though it is well known that they grow at different rates and have different metabolic rates,” Navara also said. “I think it is important to continue the research to determine whether women carrying boys should actually be eating more than women carrying girls to maximize the chances of the fetus’s survival.”

On average, 105 boys are born for every 100 girls worldwide, but that number can deviate based on a large number of social, economical and physiological variables. At times of extreme environmental stress, like war, the birth rate of girls exceeds that of boys.

Navara’s work, in part, seeks to pinpoint the physiological reasons those shifts occur.

In her analysis of birth rate data, Navara found that for women who gained less than 20 pounds, the female-to-male birth rate ratio shifted to about 52-to-48 in favor of female babies. The shift most likely is due to the fact that male fetuses require more energy in the first weeks and months of gestation and have been shown to be more likely to succumb to adverse conditions in the womb, she said.

Navara’s study is based on Centers for Disease Control and Prevention data on 46 million pregnancies over 23 years. She worked with the UGA Statistical Consulting Center to analyze the data.

“The correlation was a near perfect relationship where the proportion of males rose with the number of pounds women gained during gestation,” Navara said. “To me, that tight of a relationship indicates that weight gain and the sex ratio at birth are, in fact, directly related and that the relationship isn’t driven by another related variable.”

“I believe there is a lot to be learned by cross-referencing what different species do, and picking out the effects and mechanisms that are conserved among all of them,” she said.

In this particular study, her results could have implications on how childbearing women are instructed to care for themselves while pregnant.