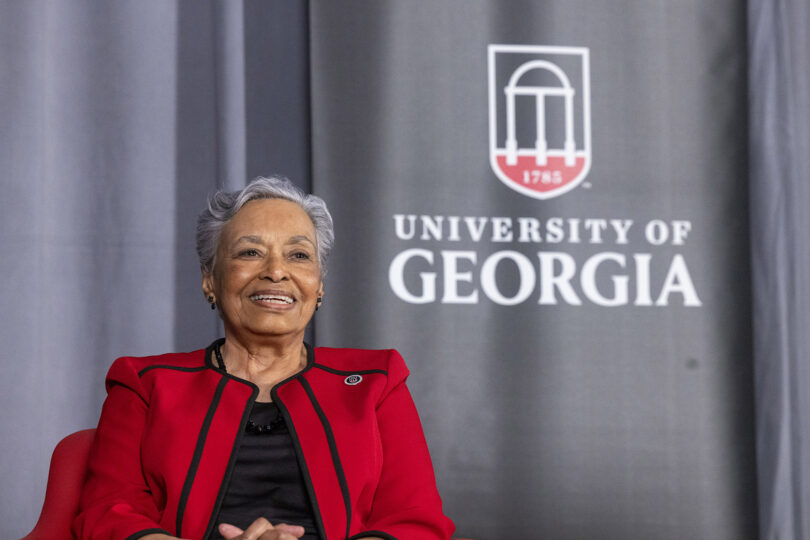 Marilyn Holmes smiles during the 2022 Holmes-Hunter Lecture as she recalls Hamilton Holmes' proposal to her. (Photo by Dorothy Kozlowski/UGA)

She shared that story during the 2022 Holmes-Hunter Lecture. Named in honor of her late husband, Hamilton Holmes Sr., and Charlayne Hunter-Gault, the first Black students to attend the University of Georgia, the lecture is sponsored by the Office of the President and focuses on race relations, civil rights and education. It has been held annually since 1985.

“This annual lecture serves as an important opportunity for our community to honor two of the University of Georgia’s most iconic individuals,” said UGA President Jere W. Morehead. “Since Charlayne and Hamilton first stepped through the Arch, a great deal has changed for the better. Diversity and inclusion are now core values of this institution, and we continue our work to build a more welcoming and inclusive learning environment. This lecture is an important part of our commitment to cultivate a vibrant exchange of ideas at the University of Georgia.”

Hunter-Gault, who previously served as the lecture speaker, opened the event with a video message to attendees.

“So today, I know when you hear from Marilyn Holmes, Hamilton’s wife and mother of his wonderful children, you will be inspired, as we were, to ‘keep on keeping on’ on our journey toward a more perfect union,” she said.

This year’s lecture featured an intimate conversation between Holmes and her daughter, Alison Holmes Johnson, that ranged from her childhood in Detroit to meeting her husband to teaching in Atlanta schools. 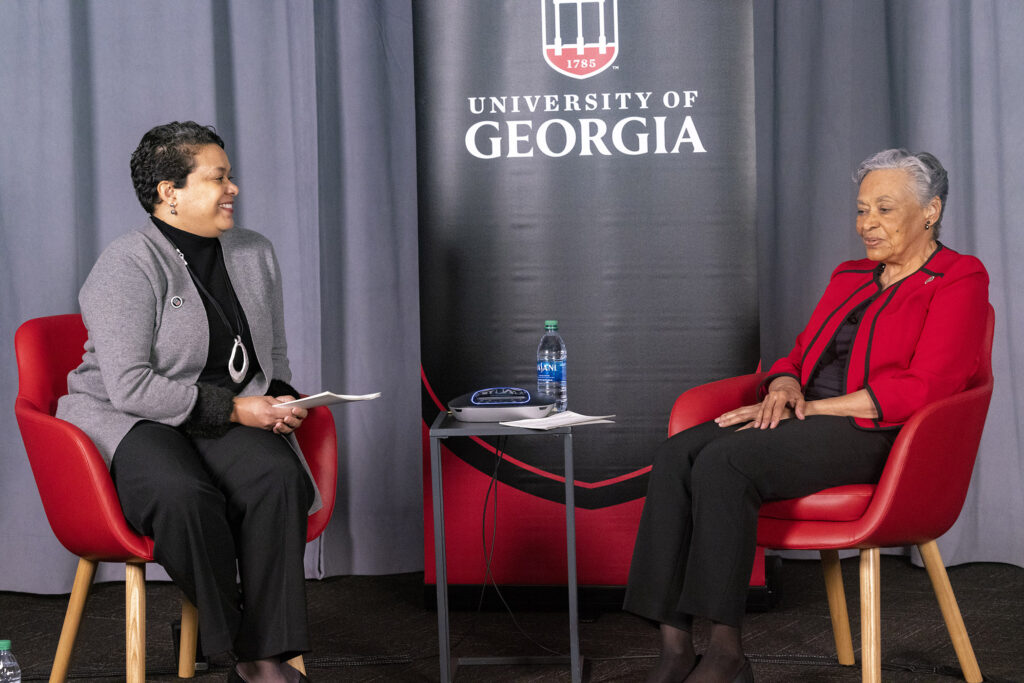 Alison Holmes Johnson, left, in conversation with her mother, Marilyn Holmes, during the 2022 Holmes-Hunter Lecture. (Photo by Dorothy Kozlowski/UGA)

The beginning of the story

Holmes’ story began in Detroit, where she was raised in a middle class, mostly white, neighborhood. Her mother stayed at home and was active in her church community and PTA, and her father was an avid gardener who taught Marilyn and her sister to fish and shoot basketball. She quickly became friends with children of Catholic and Jewish families down the street.

It was in her junior high years that the student population began to change. Holmes said more Black families moved into the community, and that meant more Black students and a few more Black faculty members. She mentioned that a decision was made not to offer algebra to eighth-grade students—a subject needed to pass a test to get into the local magnet school. She said that the vice principal made that decision because he thought those students weren’t likely to go to college. But Holmes’ mother became a “quiet militant,” got a group of parents together, worked with the school to offer algebra after all, and Holmes entered the high school magnet program.

Two particular incidents stood out in Holmes’ mind. When she was 11, her church group went to give a presentation to the Women’s City Club. She was told to say she was Indian if anyone asked.

“At 11 years old, I didn’t know quite what to make of it, and I didn’t want to cause any trouble for our chaperone, so I went along with what they asked me to do,” she said.

She later attended a conference with the same church group, and she was assigned to room with a Native American girl, “by design or by chance.” Holmes said it was a good experience, but she “began to realize that there might be other times in my life in Detroit that I would be challenged in some way, and I needed to learn how to handle those times.”

Her love story with Hamilton began in the summer of 1964, a year after he graduated from UGA. Marilyn attended a sorority convention in Philadelphia. Hamilton was working for SmithKline Beecham in Philadelphia and had been asked to serve as an escort at some of the convention’s social events. She was running for a national office, which she later won, and as the delegation members were paired with escorts, she was directed to go into a ballroom to find someone.

Marilyn turned around to walk out, and Hamilton walked out behind her. An organizer suggested they pair up for event.

That was on a Monday night. The next day was her 21st birthday, and Marilyn told her parents she’d fallen in love. Hamilton proposed—and Marilyn accepted—on Thursday night.

“We only had eyes for each other,” she said. 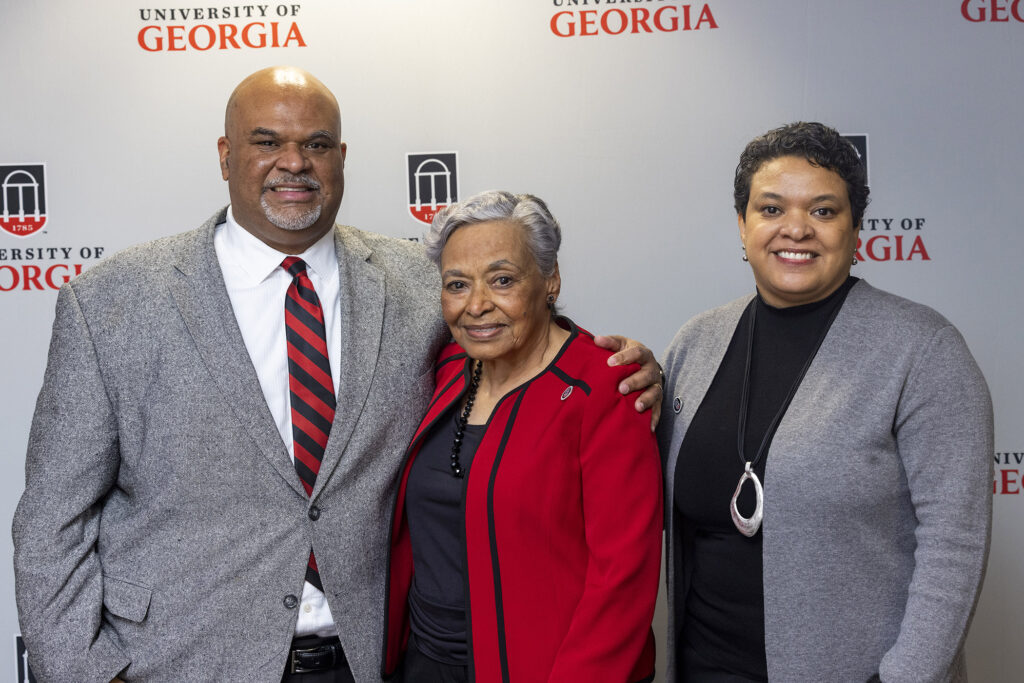 Her story as an educator began as an elementary school teacher. Holmes wasn’t allowed to teach while pregnant with their son, Hamilton Holmes Jr., but she continued to do volunteer work with local schools.

Holmes retired from teaching in 2003 after a 16-year career. Since then, she has volunteered as a reading tutor in Atlanta Public Schools and Quality Living Services Senior Center. She is a former member of the board of the Atlanta History Center and past chair of the Atlanta Speech School board of advisors. She is also an active member of her local chapter of Alpha Kappa Alpha Sorority, Inc., and is an alumna member of The Links, Inc.

She continues to champion the university’s mission with contributions to the 1961 Club and the Hamilton E. Holmes Professorship and has supported the School of Social Work and the Franklin College of Arts and Sciences.

“It’s important to note the way he and those who came behind him led their lives with respect of self, respect for others, pursuit of educational excellence—those kinds of things will be part of their legacy,” Holmes said.

“This award recognizes the momentous steps taken so that others can follow in their footsteps,” Daniels said.