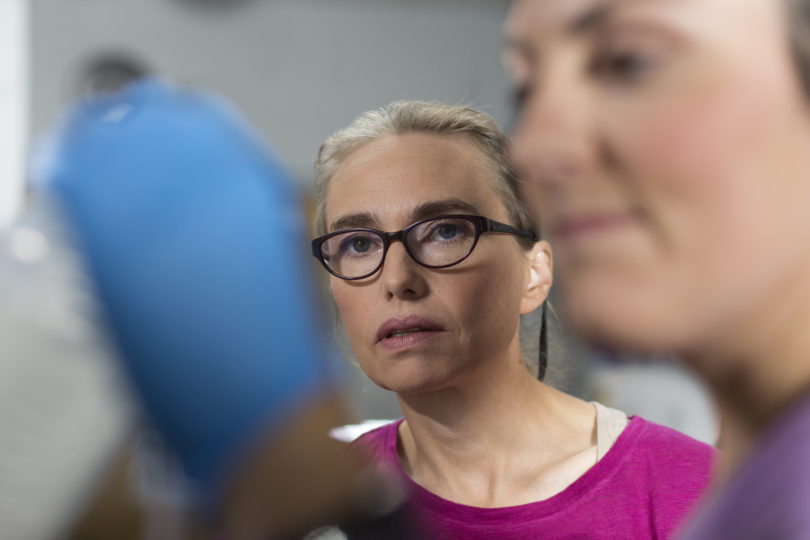 Samantha Joye, an internationally recognized University of Georgia marine scientist who studies the complex interplay between microbes and large-scale ecological processes in the oceans, has been named Regents’ Professor, effective July 1.

The Board of Regents of the University System of Georgia approved the title Tuesday at its meeting in Savannah.

Joye is Athletic Association Professor of Arts and Sciences in the department of marine sciences, part of the Franklin College of Arts and Sciences. Regents’ Professorships are bestowed by the Board of Regents on faculty members whose scholarship or creative activity is recognized nationally and internationally as innovative and pace-setting.

Read more about her work on our Great Commitments website.

“Dr. Joye combines a commitment to rigorous and innovative science with a passion for sharing research-based knowledge with the public,” said Interim Senior Vice President for Academic Affairs and Provost Libby V. Morris. “She is an inspiration to students at the University of Georgia and to countless aspiring marine scientists across the nation and beyond.”

Joye’s work explores the deep ocean and the impact of biogeochemical, ecological and environmental factors on microbes and other marine life. She has pioneered new methods of quantifying environmental factors such as microbial metabolism and geochemical signatures in extreme conditions by visiting the deepest parts of the ocean in manned submersible and remotely operated vehicles.

With 160 peer-reviewed publications and 14 book chapters, Joye’s research has been cited more than 10,000 times, placing her among the top researchers in her field, and she has been awarded nearly 40 public and private research grants since 1997. Her current grants include funding from the Gulf of Mexico Research Initiative, the Schmidt Ocean Institute, the National Science Foundation, the National Oceanographic and Atmospheric Administration and the Georgia Department of Natural Resources.

“Joye is a force of nature, driven by insatiable curiosity and apparently endless energy. She holds herself, her students and colleagues to the highest standards of thoroughness, rigor and integrity. As a person, a professor and a scientist, she is a powerful role model for both men and women,” Bess Ward, William J. Sinclair Professor of Geosciences at Princeton University, wrote in a nomination letter. “She is a truly distinguished member of the faculty of the University of Georgia.”

After the 2010 Deepwater Horizon explosion created the largest marine oil spill in history, Joye spearheaded the formation of a team of multidisciplinary researchers from across the nation to determine the environmental impacts of the hydrocarbon inputs on the Gulf of Mexico’s biome. The Ecosystem Impacts of Oil and Gas Inputs to the Gulf (ECOGIG) consortium, which brings together researchers from 16 institutions across the United States, continues its work today and has resulted thus far in 34 seagoing expeditions and more than 110 publications and 300 presentations.

“Joye directs not only her own top-flight research program in marine sciences at UGA, but also a top-flight consortium … ECOGIG is truly transforming the way we think about the Gulf and its relationship to the myriad of hydrocarbon springs on its seafloor,” Jeffrey Chanton, Robert O. Lawton Distinguished Research Professor and John Widmer Winchester Professor of Oceanography at Florida State University, wrote in his nomination letter. “In addition to her impressive scientific contributions, she has made heroic efforts to communicate science to the general public while mentoring the next generation of scientists.”

In addition to thousands of press interviews with media outlets from National Geographic to the New York Times, Joye has engaged in various projects with artists to translate science to the public, including a current partnership with painter Rebecca Rutstein that was featured at a recent Alliance for the Arts in Research Universities conference at UGA. Joye recently collaborated with artist Jim Toomey of the popular “Sherman’s Lagoon” comic strip to create an award-winning short film series entitled “The Adventures of Zack and Molly,” which highlights the importance of healthy oceans. In addition, Joye’s research has been featured in two documentaries, “Black and Blue: Beneath the Gulf Oil Disaster” and “Atlantis Revealed: Where the Oil Went,” and her work has been filmed for the BBC’s “Blue Planet” series.

Joye is a Fellow of the American Association for the Advancement of Science, the American Geophysical Union and the American Academy of Microbiology and a Sustaining Fellow of the Association for Sciences for Limnology and Oceanography. She has testified before Congress numerous times on the impact of the oil spill and is a recipient of a Distinguished Service Award for Education and Outreach from the U.S. Department of the Interior’s Minerals Management Service. She received a Faculty Achievement Award from the Southeastern Conference in 2015 and a Creative Research Medal from the University of Georgia in 2008.

A scientist and artist illuminate the darkness