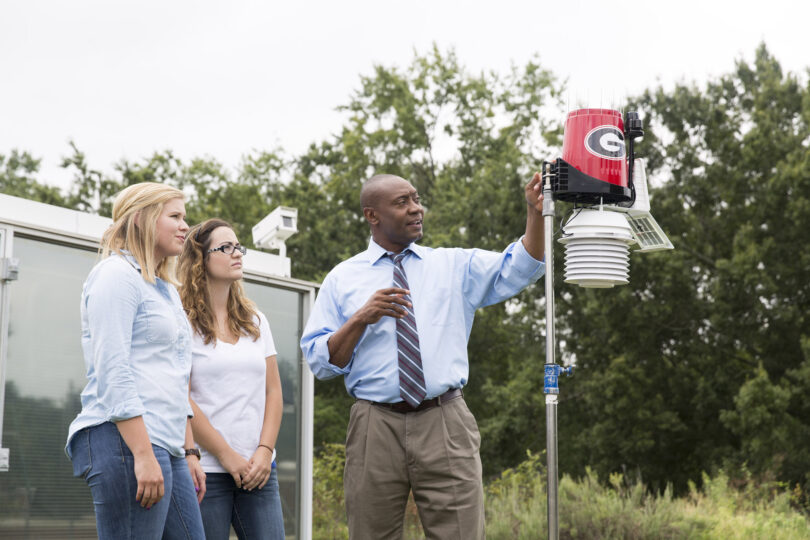 Professor Marshall Shepherd interacts with students around a weather station on the roof of the Geography Building. (UGA photo)

Marshall Shepherd, the Georgia Athletic Association Distinguished Professor of Geography and Atmospheric Sciences at the University of Georgia, has been named the 2022 SEC Professor of the Year.

The award is given annually to one SEC faculty member whose record of teaching and research places him or her among the elite in higher education. Winners are selected by the SEC provosts from among the 14 SEC Faculty Achievement Award recipients.

“Dr. Shepherd is a celebrated teacher and scholar who has shaped a generation of atmospheric scientists, and his professional leadership and public engagement – in Georgia and nationally – are unrivaled,” said President Jere W. Morehead. “He combines extraordinary instruction, including mentoring diverse students from a variety of backgrounds, with pioneering scholarship and an unwavering commitment to applying his expertise for the benefit of communities across the nation and beyond.”

In recognition of the honor, the SEC will provide Shepherd with a $20,000 honorarium. Shepherd is the second UGA faculty member to be named SEC Professor of the Year, with Loch Johnson in the School of Public and International Affairs receiving the inaugural honor in 2012.

“The SEC is certainly known for many things,” Shepherd said. “The research, service and instruction within its institutions are world-class. I am grateful to have been recognized and honored to be among this class of SEC nominees. Achieving this at the University of Georgia, the flagship institute of my home state, just means more.”

Research conducted by Shepherd and his colleagues has catalyzed entirely new areas of study, such as how wet soils can sustain the intensity of tropical storms and hurricanes, and how urban areas can impact rainfall patterns. His research has been supported with $30 million in funding from agencies such as NASA, the National Science Foundation and the U.S. Department of Energy. He has authored or co-authored seven books and more than 100 peer-reviewed scholarly publications.

Professional and public engagement are key priorities for Shepherd. At UGA, he has served on numerous committees, including the Program Review and Assessment Committee, and he has been a faculty representative to the UGA Athletic Association Board of Directors since 2016.

He recently chaired the NASA Earth Sciences Advisory Committee and was the 2013 President of the American Meteorological Society, the nation’s largest and oldest professional and scientific society in the atmospheric and related sciences. His expertise has been called on by both the U.S. House and the U.S. Senate, where he briefed committees examining extreme weather and climate. Former President George W. Bush honored Shepherd in 2004 at the White House with the Presidential Early Career Award for Scientists and Engineers. In 2015, he was invited to moderate the White House Champions for Change event.

Shepherd is the host of The Weather Channel’s “Weather Geeks” podcast and is a senior contributor to Forbes, where his stories have received nearly 10 million page views since 2019 alone. He routinely appears on national media outlets, and his most recent TED Talk on biases that shape views on science has been viewed 2.7 million times. In addition, his TED Talk on climate misinformation is routinely assigned in classrooms across the nation.

While fulfilling his national commitments, Shepherd directs UGA’s Atmospheric Sciences Program, which has grown dramatically in student enrollment and diversity under his leadership. He was instrumental in UGA’s election to the University Corporation for Atmospheric Research, a select consortium whose membership includes the most prominent atmospheric sciences programs in North America. To give students hands-on learning experiences while also providing invaluable real-time information to northeast Georgia residents, the Atmospheric Sciences Program added state-of-the-art weather forecasting capability under his leadership.

“Dr. Shepherd’s pioneering research has yielded insights that are reshaping society’s understanding of weather and climate and informing efforts to make communities more resilient,” said S. Jack Hu, the university’s senior vice president for academic affairs and provost. “He is an inspiring mentor to students at the University of Georgia and a nationally celebrated scholar whose expertise is widely sought. He represents our institution, and the SEC as a whole, with distinction.”