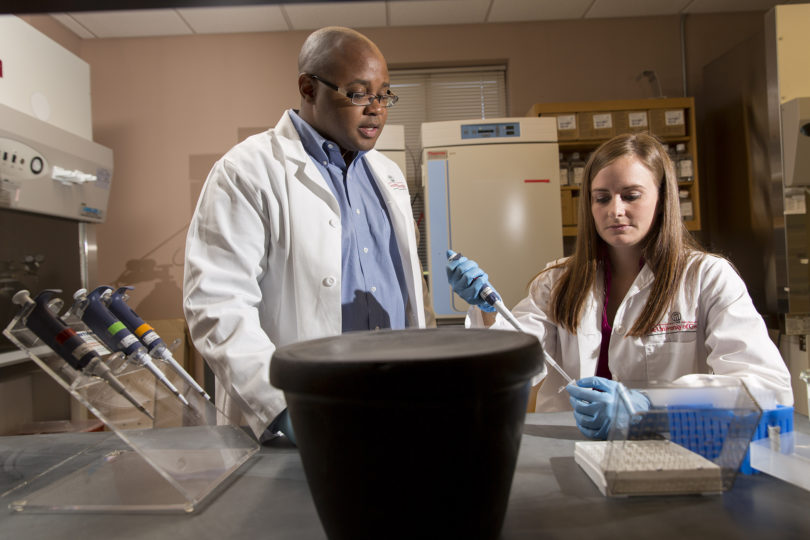 Franklin West, an associate professor in the College of Agricultural and Environmental Sciences, is the senior author of the paper.

It is well-known in the medical field that the pig brain shares certain physiological and anatomical similarities with the human brain. So similar are the two that researchers at the University of Georgia’s Regenerative Bioscience Center have developed the first U.S. pig model for stroke treatments, which will provide essential preclinical data and speed the drug discovery process.

Often referred to by research teams as “the animals most like people,” pig-derived medical products have a long history of use in humans and have improved the lives of countless patients. Pig heart valves are used to replace damaged or diseased human valves, diabetics may use insulin taken from pigs, and the blood-thinning drug heparin was first derived from a pig.

“Compared to mice, our large animal stroke model is a more rigorous test of potential therapeutics with findings that are likely more clinically relevant,” said Franklin West, an associate professor in the College of Agricultural and Environmental Sciences and senior author of the paper describing the model.

Using their model, the team has shown that induced neural stem cells, or iNSCs, can replace stroke-damaged brain tissue and stimulate neuroplasticity — the brain’s ability to naturally repair itself.

“This is the first time that a neural stem cell therapy has been tested in a large animal model with a brain more similar to humans,” said Emily Baker, lead author of the study, who recently received her doctorate in neuroscience from UGA. “With greater predictive capabilities, there’s a better likelihood of it working in a human.”

Stroke is the cause of one in every 19 U.S. deaths and has an estimated annual cost of $315 billion — 56 percent higher than treatment associated costs of all cancers, according to the American Heart Association.

Basically, if you have a stroke and you get this treatment, fewer neurons are going to die, and for stroke research that’s critically important. — Franklin West

Despite the urgent need, almost all clinical trials of neuroprotective therapies to date have failed to translate from the laboratory to the clinic, according to the RBC research team.

Stroke therapies that worked on small animals such as mice more often than not proved ineffective in human strokes. With the failure of so many clinical trials, the concept of neuroprotection and the inability to demonstrate a regenerative action to restore and replace brain tissue has been the subject of many discussions in both research and medical communities.

Through this model, the research team was able to more precisely establish the repair mechanism by which stem cells work in neural tissue regeneration and neuroprotection than was previously known.

“The takeaway from this work is that the injected stem cells led to cellular and tissue improvement,” West said. “Basically, if you have a stroke and you get this treatment, fewer neurons are going to die, and for stroke research that’s critically important.”

The findings from the study, published in Nature’s Scientific Reports, suggest that there are peripherals of salvageable brain tissue that would benefit from cell-based restorative therapies after acute ischemic stroke. Specifically, iNSCs that naturally promote brain plasticity and recovery.

In collaboration with Emory University and UGA’s College of Veterinary Medicine, the team’s work shows improved recovery in white matter, the “superhighways of connectivity” that connect key centers of the brain. This change in response to restorative therapy can be monitored using MRI imaging techniques.

“From the MRI we learned of a recovery mechanism in that neural stem cell therapy improves white matter integrity,” said Baker. “We now have white matter tracts that allows for faster, more effective communication from one region in the brain to another after injury.”

The research marks a major milestone and, while a long way from clinical use, it may speed stroke discoveries by providing a better, more predictive translational model. Researchers within the RBC are already using this model as a platform for future nanotechnology applications.

“If we can replace lost brain tissue and neural systems that are basically gone from stroke, which would lead to functional improvement or functional independence like feeding yourself, getting yourself dressed and being able to move again, then we’ve met our long-term goals-but in the bigger picture what we’ve done is improve the quality of life,” said West.