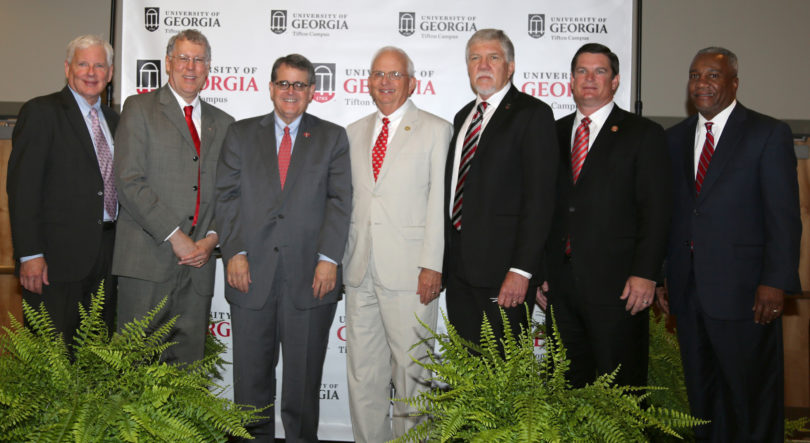 The campus has been a backbone to the state's No. 1 industry of agriculture

For 100 years, the University of Georgia Tifton campus has been committed to agricultural research that benefits the state of Georgia and the world. As the campus turns the page to its next century, UGA-Tifton is focused on cultivating the next generation of agricultural leaders who will help feed and clothe a growing population.

On May 3, UGA-Tifton held a centennial celebration that was as much a time of hope and excitement in looking to the future as it was a day of reflection on the campus’s past accomplishments.

“Agriculture is Georgia’s No. 1 industry, and the UGA Tifton campus has played a vital role in helping our farmers build this industry and sustain its success,” said President Jere W. Morehead. “I am confident that the positive impact of our faculty, staff and students at UGA-Tifton will be even greater over the next 100 years.”

A part of highlighting the campus’s future was a research poster competition of the work being done by undergraduate, graduate and postdoctoral students at UGA-Tifton in the College of Agricultural and Environmental Sciences. Students shared their individual projects and met with UGA administrators and industry leaders.

“Since the first class of students graduated from UGA-Tifton in 2004, we have seen some of the brightest scholars in the region grow and explore the science of agriculture on our Tifton campus,” said CAES Dean Sam Pardue. “These students have a tremendous opportunity to earn a UGA degree close to home while working alongside some of the very best agricultural scientists in the world. After seeing their presentations, we are all assured the future of the industry is in good hands.” 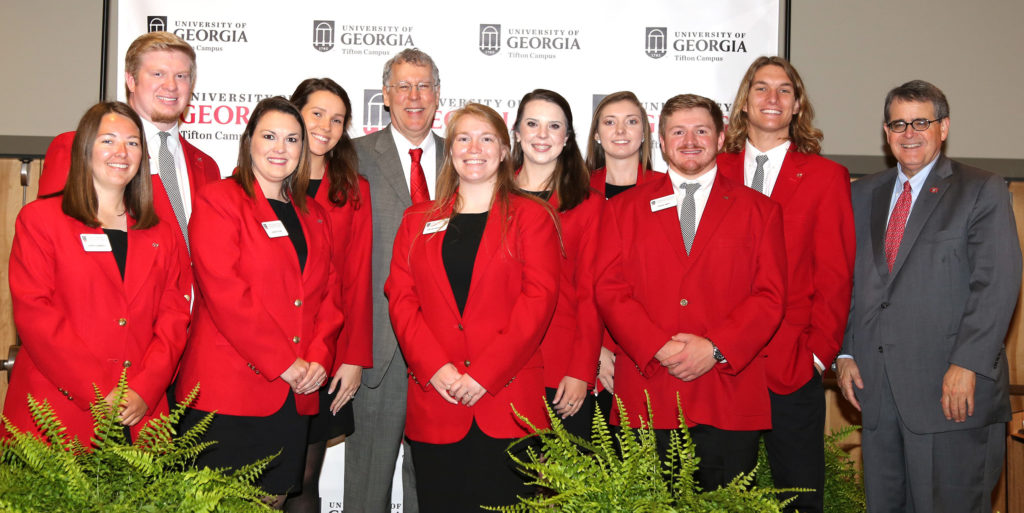 Pardue spoke about his vision for the future, which includes the continued success of the campus in helping to maintain agriculture as the top industry in Georgia.

“Cutting-edge science has been our tradition in the College of Agricultural and Environmental Sciences for more than a century. Our scientists are ready to lead the way to the great discoveries ahead,” Pardue said.

“We will move forward from the days of creating the first mechanical peanut combine to developing new precision agriculture tools, such as robotic technology that can harvest a whole host of crops. We will use what we have learned from generations of irrigation research to ensure we have the technology at our fingertips to conserve and protect our essential water resources in the future while improving crop productivity. We will explore vast opportunities in the newest areas of agricultural science, including the role of the microbiome, genetics and genomics, controlled-environment farming and other new technologies that will make us better scientists, better teachers and better stewards of agriculture,” Pardue added.

“This day of celebration is an opportunity to look in the rearview mirror and see what’s happened on our campus, but as scientists, we always have to be looking forward,” said UGA-Tifton Assistant Dean Joe West. “May 3 is not an end; it really is a beginning.”

Part of the day’s festivities also included the dedication of the Centennial Garden, located behind the Tift Building in the center of campus. The 2-acre garden is a re-creation of a garden that existed in an earlier era. It contains 100% UGA-generated genetic plant releases.

In collaboration with the U.S. Department of Agriculture’s Agricultural Research Service, UGA-Tifton is host to more than 400 employees, including scientists focused on various research projects dealing with crops, insects and plant diseases. The campus covers more than 5,000 acres in South Georgia. UGA-Tifton research projects also are conducted on farms and research and education centers throughout the state in Attapulgus, Camilla, Midville and Plains.