Reparative hydrogel mimics the composition and mechanics of the brain

At a cost of $38 billion a year, an estimated 5.3 million people are living with a permanent disability related to traumatic brain injury in the United States today, according to the Centers for Disease Control and Prevention. The physical, mental and financial toll of a TBI can be enormous, but new research from the University of Georgia provides promise.

In a new study, researchers at UGA’s Regenerative Biosciences Center have demonstrated the long-term benefits of a hydrogel, which they call “brain glue,” for the treatment of traumatic brain injury. The new study provides evidence that not only does the gel protect against loss of brain tissue after a severe injury, but it also might aid in functional neural repair.

Reported on March 5 in Sciences Advances, the new finding is the first to provide visual and functional evidence of the repair of brain neural circuits involved in reach-to-grasp movement in brain glue-implanted animals following severe TBI.

“Our work provides a holistic view of what’s going on in the recovery of the damaged region while the animal is accomplishing a specific reach-and-grasp task,” said lead investigator Lohitash Karumbaiah, an associate professor in the University of Georgia’s College of Agricultural and Environmental Sciences. 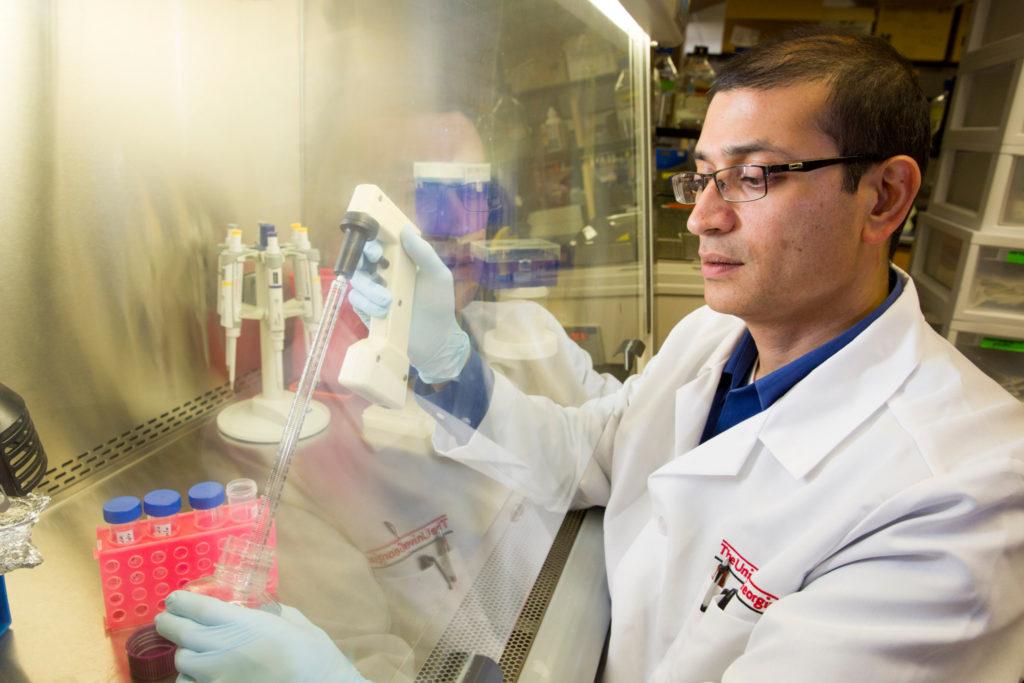 Created by Karumbaiah in 2017, brain glue was designed to mimic the structure and function of the meshwork of sugars that support brain cells. The gel contains key structures that bind to basic fibroblast growth factor and brain-derived neurotrophic factor, two protective protein factors that can enhance the survival and regrowth of brain cells after severe TBI.

In a prior short-term study, Karumbaiah and his team showed that brain glue significantly protected brain tissue from severe TBI damage. In this new research, to harness the neuroprotective capacity of the original, they further engineered the delivery surface of protective factors to help accelerate the regeneration and functional activity of brain cells. After 10 weeks, the results were apparent.

“Animal subjects that were implanted with the brain glue actually showed repair of severely damaged tissue of the brain,” said Karumbaiah. “The animals also elicited a quicker recovery time compared to subjects without these materials.”

To measure the glue’s effectiveness, the team used a tissue-clearing method to make brain tissue optically transparent, which allowed them to visually capture the immediate response of cells in the reach-to-grasp circuit using a 3D imaging technique.

“Because of the tissue-clearing method, we were able to obtain a deeper view of the complex circuitry and recovery supported by brain glue,” said Karumbaiah. “Using these methods along with conventional electrophysiological recordings, we were able to validate that brain glue supported the regeneration of functional neurons in the lesion cavity.”

Karumbaiah pointed out that the RTG circuit is evolutionarily similar in rats and humans. “The modulation of this circuit in the rat could help speed up clinical translation of brain glue for humans,” he said.

With support from UGA’s Innovation Gateway, Karumbaiah has filed for a patent on the brain glue. He is also partnering with Parastoo Azadi, technical director of analytical services at the UGA Complex Carbohydrate Research Center, and GlycoMIP, a $23 million, National Science Foundation-funded Materials Innovation Platform, created to advance the field of glycomaterials through research and education.

“Doing the behavioral studies, the animal work and the molecular work sometimes takes a village,” said Karumbaiah. “This research involved a whole cross-section of RBC undergraduate and graduate students, as well as faculty members from both UGA and Duke University.”

The collaborative research effort provided five UGA RBC fellow undergraduates with an experiential learning opportunity and to publish their first paper. This is the first publication for Rameen Forghani, an aspiring M.D.-Ph.D. undergraduate working in the Karumbaiah lab.

Forghani said the undergraduate team “learned how to collaborate on this project” and about the impact of moving lab research to patients who need treatment.

“My fellow undergraduates and I were empowered to take ownership of a piece of the project and see it through from the planning stages of data analysis to writing and being published,” said Forghani. “As an aspiring, early-career physician-scientist, working on a project that has translational impact and directly addresses a very relevant clinical problem is very exciting to me.”

Charles Latchoumane, research scientist in the Karumbaiah lab and first author on the study, divides his time between UGA and Lausanne, Switzerland, where he works at NeurRestore, a research center aimed at restoring lost neurological function for people suffering from Parkinson’s disease or from neurological disorders following a head injury or stroke.

“This study has been four to five years in the making,” said Latchoumane. “Our collaborative research is so painstakingly documented that, after you read about it, you have to believe there is new hope for severe victims of brain injury.”

This work was supported by grants to Karumbaiah from the National Institutes of Health (RO1NS099596, R24GM137782), the Regenerative Engineering and Medicine Center seed grant program, and an Alliance for Regenerative Rehabilitation Research and Training technology development grant.