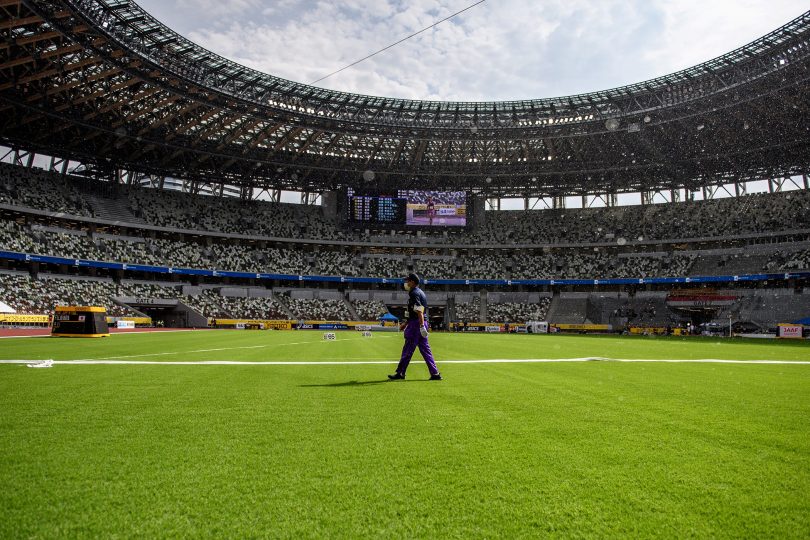 An official walks across the infield of the National Stadium in Tokyo, home of the 2020 Olympic Games. A UGA-bred grass will be used on the field. (Photo by PHILIP FONG/AFP via Getty Images)

UGA’s TifSport and TifGrand, tough and durable bermudagrasses, were decades in the making

The Summer Olympics may be in Japan this year, but Team USA was on home turf when they took the field for Friday’s opening ceremony.

The Japan National Stadium’s field was sodded with TifSport Bermudagrass, developed in South Georgia. One of many grass varieties created and tested at the University of Georgia’s Tifton Campus, TifSport is a dense, medium- to fine-textured grass bred to withstand the high traffic sports fields see while tolerating herbicides.

The field will be resodded with Tifton grass, inspired by UGA’s Tifway, a hybrid bermudagrass that can stand up to heat, sun and wear and tear from sports.

But how did Georgia-grown grass catch the Chubu Company’s eye in the first place?

UGA’s Tifton campus is world renowned for its turfgrass research, with scientists like Glenn Burton leading innovation in turf since the 1950s.

Later, USDA and UGA researchers at the Tifton campus created Tifway and Tifdwarf, two bermudagrass hybrids that for years covered more golf courses, athletic fields and lawns that any other turf varieties in the world. For decades, Tifway remained the gold standard.

Schwartz’s predecessor, Wayne Hanna, a former professor of Crop and Soil Sciences and member of the Institute of Plant Breeding, Genetics and Genomics, spent almost three decades working with fellow researchers and students to develop cultivars with improved shade tolerance while maintaining a pretty, dense and dark green surface.

After carefully selecting and hybridizing “parent” plants with the traits the researchers were looking for came the real test.

“Tifton has very sandy soil, it rains a lot and then it doesn’t rain at all, there are bugs that attack plants (and people)—it’s a very tough place to survive for a lot of plants,” said Brian Schwartz, a professor of Crop and Soil Sciences in the College of Agricultural and Environmental Sciences. “But that makes it a very successful plant breeding location for almost all crops.”

The researchers spend anywhere from five to 10 years—and sometimes more— “trying to kill all the turfgrasses we can. Let’s not fertilize them enough. Let’s beat them up with our traffic machine,” a tool that mimics the natural wear and tear from people playing and walking on the grass in a short amount of time. At the end of the process, the five or 10 grasses left standing are then tested throughout the state and then the Southeast and beyond.

“It’s a long process, and I would like it to be quicker, but it is the long process that helps you have a stable product,” Schwartz said.

Putting those grasses through the wringer weeds out the weaker turf varieties, leaving behind grasses that can take a beating and keep looking pretty. The result of decades of testing, TifTuf, for example, is a beautiful bermudagrass that can save you water and stand up to daily wear and tear due to its superior drought and wear tolerance. Meanwhile TifSport, which can stand up to pests and cold, remains one of the top sellers of all time.

Another one of those last grasses standing was TifGrand. Released in 2008, the grass has since taken off, and it’s particularly appealing to sports venues.

TifGrand bermudagrass is a dense, very dark green grass, and it will be the breed in the National Stadium for the Summer Paralympic Games in late August.

“It has a really thick root system that’s right at the top of the field for sports where your cleats are interacting within that top inch of soil or so,” Schwartz said. “People won’t just change out the Super Bowl stadium field just because you tell them it’s a really good grass. As a grass performs well over many years, then they start switching things out. And I think that’s how TifGrand really made its way into the Olympics.”

TifGrand is also incredibly shade tolerant, which is key for a stadium like Japan’s with high walls of seating and roofing that could hinder grass growth on the field.

“It’s easy to claim ‘shade tolerance’ verbally, but it’s not easy to verify such traits scientifically,” said Fumi Miyachi, of Chubu Company in Japan, the company responsible for researching and finding the perfect grasses for the Olympic stadium. “TifGrand was the only scientifically-proven variety in the industry. We quickly signed an experimental evaluation agreement and tested TifGrand locally. The result was more than our expectations.”

Today, scientists like Schwartz work with UGA Cooperative Extension specialists to build and grow relationships with people and companies around the world.

“The turf program’s success is a huge team effort all the way from my 16-year-old brand new student worker to people who’ve been at the Tifton campus for longer than I have,” Schwartz said. “We’re here to serve the greater need of our society. It’s a neat mission of the land-grant system here that we can take our time and focus on making a difference in this industry.”