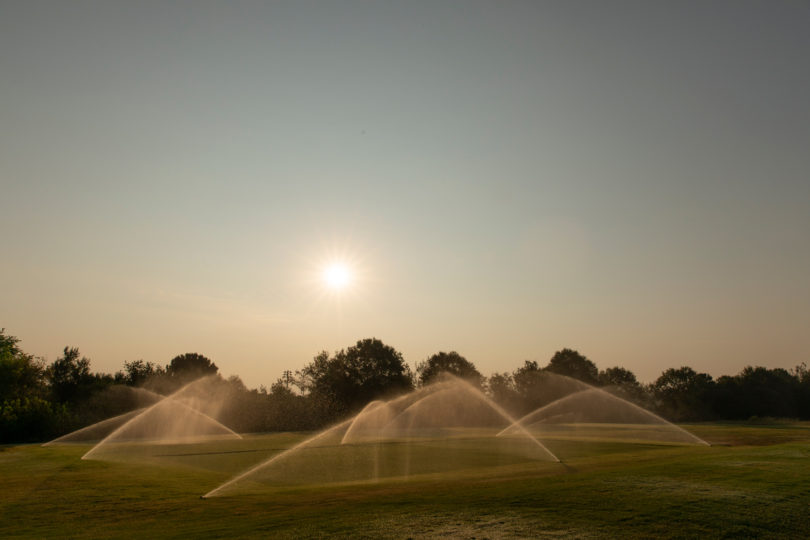 The University of Georgia has been an innovator in turfgrass research and production since the 1930s. (Photo by Andrew Davis Tucker/UGA)

It takes a lot of work, money, and time to make a field fit for play.

In the case of the turfgrass breeding program at the University of Georgia, it took the creation of upwards of 25,000 new hybrid grasses before a final product was launched into the market. The entire journey was anchored by a research, discovery, and development process that dates back nearly a century. 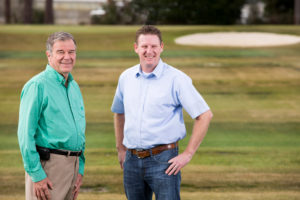 The research of Wayne Hanna (left) and Brian Schwartz led to the creation of TifTuf, a bermudagrass hybrid that is the strongest UGA has ever produced. (Photo by Dorothy Kozlowski/UGA)

The turfgrass that carpets Vince Dooley Field at Sanford Stadium (along with a majority of other SEC stadiums and many other fields ranging from World Cup pitches to the Summer Olympics Games) is Tifway 419, which was developed at the University of Georgia Tifton campus in the 1960s. The warm-weather bermudagrass hybrid is well-known for its durability and speed of recovery—two important qualities for a sports field as well as your standard front lawn. There are few things in our environment as seemingly simple as grass. But at the University of Georgia, there are few things more rigorously tested.

“People take for granted that grass just grows, but it takes 15 to 20 years of research for it to end up on their lawn,” says Wayne Hanna, a professor of crop and soil sciences at UGA Tifton.

Hanna should know. He’s been growing grass in South Georgia for 49 years, first with the USDA Agricultural Research Service and then with UGA’s Institute of Plant Breeding, Genetics, and Genomics.

Still, regarding research time, Hanna actually sells himself a little short. UGA’s latest turfgrass product, developed by Hanna and associate professor Brian Schwartz, was 25 years in the making. TifTuf, which hit the market in 2017, was selected from more than 27,000 bermudagrass cultivars over those 25 years. It’s the strongest turfgrass ever produced at UGA, and it uses 38% less water than previous grasses. Its versatility is difficult to beat too.

The turfgrass industry employs 87,000 Georgians and generates an estimated $9 billion in economic impact every year.

TifTuf can be found on the lawn in front of the Sydney Opera House in Australia and the great lawn at the Atlanta Botanical Garden. When you walk across the grass of North Campus, you are walking on TifTuf.

“It’s kind of a neat story of the old guy and the new guy working together toward solving the problem of drought tolerance,” says Schwartz, who took over leadership of UGA’s turfgrass program from Hanna in 2009. When Schwartz got to Tifton, he studied years of Hanna’s work and the hybrid grasses he developed—taking into account qualities such as shade tolerance, drought tolerance, and appearance—researching and testing breed after breed until TifTuf was selected as the most elite.

Their work was just the latest accomplishment in a long line of distinguished research that was begun before World War II by one of the 20th century’s most important scientists.

The University of Georgia has been an innovator in turfgrass research and development since the 1930s, and the man most responsible for that is a legend in agricultural science: Glenn Burton. Soon after his arrival, the Nebraska native began experimenting with bermudagrasses in an effort to come up with useful forage grasses to feed the South’s cattle.

At the time, bermudagrass was a controversial choice because farmers considered it invasive, but Burton was undeterred. His perseverance paid off. After a few years of research, Burton created a hybrid grass that, once it was planted, more than doubled forage production across the South. He continued his work and released newer and better grasses that are still found in fields around the world to this day.

Burton’s work on forage grasses caught the attention of the United States Golf Association. At the time, many courses across the country were covered by painted sand and little else. Burton developed grasses for this growing sport.

That work led to the creation of Tifway and Tifgreen, two bermudagrass hybrids, in the 1950s. For years, Tifway covered more golf courses, athletic fields, and lawns than any other turf varieties in the world.

He developed pearl millet hybrids as a drought tolerant annual summer grazing crop for the southern U.S. and cooperated with scientists in India to encourage hybrid production in that country.

“I don’t think I’ve ever met a person or known a person who was more dedicated to research than he was,” says Hanna, a disciple of Burton’s and his colleague for more than 30 years.

Burton worked his entire 61-year career at the University of Georgia’s Coastal Plain Experiment Station in Tifton, Ga., conducting research for the USDA Agricultural Research Service until he retired in 1997 and became part of the UGA Tifton faculty. His career accomplishments include the National Medal of Science, multiple honorary degrees, and membership in four agricultural halls of fame.

“Just like an oak tree or a rose, turfgrass is a living plant,” says Clint Waltz, an extension specialist at the Turfgrass Research and Education Center at UGA Griffin. “It has an organic surface and a root system. It has actively growing leaves, and it’s photosynthesizing. What makes turf different from many other plants is that we want people to use and play and run around on it.”

Turfgrass is also big business and a huge economic driver for the state. The turfgrass industry employs 87,000 Georgians and generates an estimated $9 billion in economic impact every year.

As such, UGA devotes significant resources to this important area. UGA’s Turf Team includes more than 20 faculty and staff in the College of Agricultural and Environmental Sciences spread across campuses in Tifton, Griffin, and Athens. In 2017, after three years of construction, the university opened new turfgrass research and education facilities on each campus, with the goal of keeping the university at the forefront of turf breeding programs across the nation.

In Tifton and Athens, new greenhouses support UGA’s expanding warm-season turf breeding program. Athens also has a new classroom/office complex for undergraduate teaching and research. But the largest new facility is the Turfgrass Research Building in Griffin. It houses a bevy of turfgrass scientists, staff, and students, and provides them with state-of-the-art laboratory, classroom, and greenhouse space.

It’s an emphasis on research is what drives the entire turfgrass operation. And it’s the products that come from that research that benefit young athletes, scratch golfers, dedicated gardeners, and most anyone who enjoys a nicely manicured yard.

“Our goal isn’t to just put out something quickly just to see if it will work or make money,” Schwartz says. “We’re really trying to base things in long-term science. If someone spends thousands of dollars on their lawn, you’re not supposed to replace it every couple of years. You would expect for it to be there maybe for the rest of their life. So, we’re not looking for short-term fixes.

“UGA’s turfgrass program has been going for close to 80 or 90 years. We have a lot to live up to.”