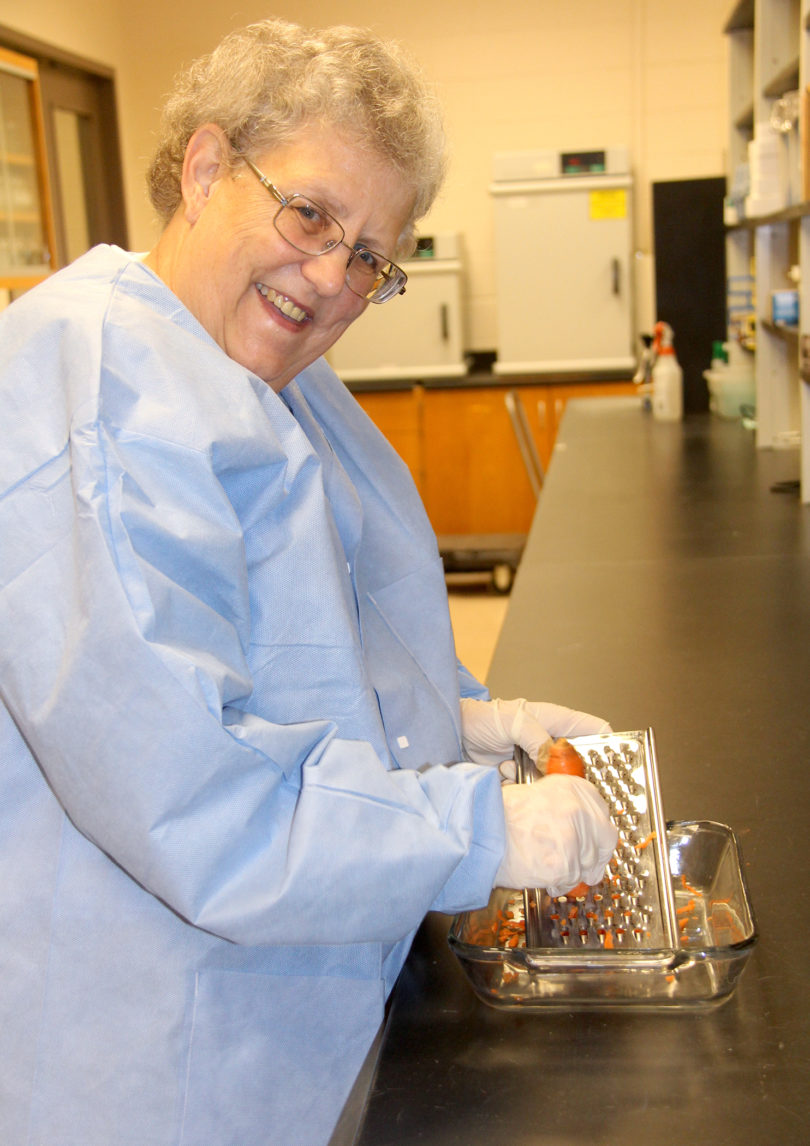 Marilyn Erickson grates a carrot to test the chances of cross contamination in home kitchens. An associate professor

Griffin, Ga. – In a recent study funded by the U.S. Food and Drug Administration, University of Georgia researchers found that produce that contained bacteria would contaminate other produce items through the continued use of knives or graters—the bacteria would latch on to the utensils commonly found in consumers’ homes and spread to the next item.

Unfortunately, many consumers are unaware that utensils and other surfaces at home can contribute to the spread of bacteria, said the study’s lead author Marilyn Erickson, an associate professor in the College of Agricultural and Environmental Sciences’ department of food science and technology.

“Just knowing that utensils may lead to cross-contamination is important,” Erickson said. “With that knowledge, consumers are then more likely to make sure they wash them in between uses.”

Erickson has been researching produce for the past 10 years. Her past work has mainly focused on the fate of bacteria on produce when it’s introduced to plants in the field during farming.

In 2013, she was co-author on a study looking at the transfer of norovirus and hepatitis A between produce and common kitchen utensils—finding that cutting and grating increased the number of contaminated produce items when that utensil had first been used to process a contaminated item.

This study, published in Food Microbiology, is similar in that it considers the influence that knives and graters have on the transfer of pathogenic bacteria to and from produce items. She urges consumers to realize that these germs can spread in their kitchens as well.

Researchers have known that poor hygiene and improper food preparation practices in a consumer’s home can lead to foodborne illnesses, but considering what practices in the kitchen are more likely to lead to contamination has not been examined extensively.

“The FDA was interested in getting more accurate numbers as to what level of cross-contamination could occur in the kitchen using standard practices,” Erickson said.

In her recent study, Erickson contaminated many types of fruits and vegetables in her lab—adding certain pathogens that often can be found on these foods, such as salmonella and E. coli.

Using a knife, Erickson would cut into things like tomatoes or cantaloupe and other types of produce to see how easily the bacteria could spread when the knife was continuously used without being cleaned. Because they “were looking at what would be the worst-case scenario,” she said, Erickson and study co-authors did not wash between cutting these different produce items.

Researchers also grated produce, like carrots, to see how easily the pathogens spread to graters. They found that both knives and graters can cause additional cross-contamination in the kitchen and that the pathogens were spread from produce to produce if they hadn’t washed the utensils.

“A lot of the broken up material and particles from the contaminated produce remained on the graters,” said Erickson, who conducts her research at the UGA Center for Food Safety in Griffin. “Then if you were to shred another carrot or something else immediately after that, it gets contaminated, too.”

The study also found that certain fruits and vegetables spread pathogens to knives to different degrees.

“For items like tomatoes, we tended to have a higher contamination of the knives than when we cut strawberries,” Erickson said. “We don’t have a specific answer as to why there are differences between the different produce groups. But we do know that once a pathogen gets on the food, it’s difficult to remove.”

Knives and graters aren’t the only utensils in the kitchen consumers should be worried about. Erickson has also helped study the role brushes and peelers have on the transfer of dangerous kitchen bacteria.

In concurrent studies, Erickson found that scrubbing or peeling produce items—like melons, carrots and celery—did not eliminate contamination on the produce item but led to contamination of the brush or peeler. Even when placed under running water, the utensils still became contaminated; however, the ability to cross-contaminate later produce items depended on the brush type and the pathogenic agent.

These studies combined give researchers a better idea as to how common cross-contamination is in the kitchen—even when just using standard practices.

Erickson explained there is a small chance of buying fruits and vegetables contaminated with bacteria, but the problem can occur-whether the product is store-bought or locally grown.

Additional study co-authors were Qing Wang, a doctoral student at the University of Delaware, and Jean Liao, a research professional; and associate professors Jennifer Cannon and Ynes Ortega with UGA’s Center for Food Safety.

The study, “Contamination of knives and graters by bacterial foodborne pathogens during slicing and grating of produce,” is available at http://www.sciencedirect.com/science/article/pii/S0740002015001306.