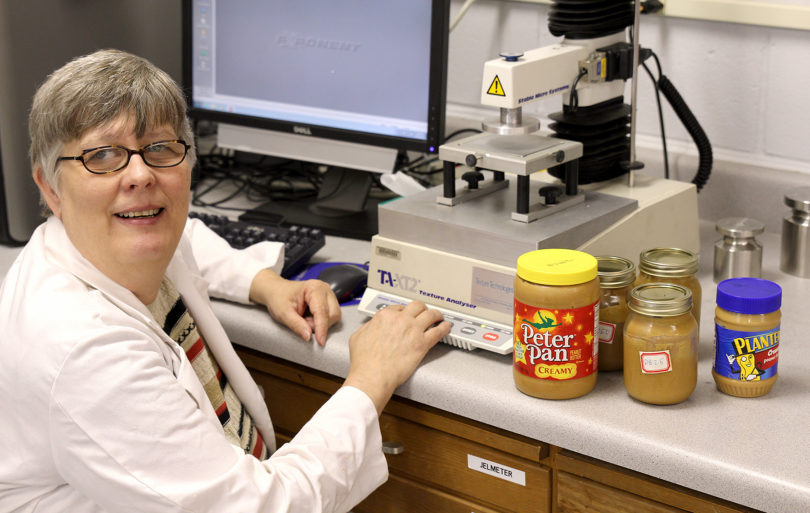 Athens, Ga. – The United States grows about 3 million metric tons of peanuts per year and uses 60 percent of that amount to make nearly 1.2 billion pounds of peanut butter. Before the legumes are ground to a spreadable consistency, machines first shake off each peanut’s thin, papery skin. The skins are then thrown away.

A new study from the University of Georgia published in the journal LWT – Food Science and Technology has found a way to incorporate peanut skins—which are high in antioxidants and dietary fiber—back into peanut butter.

Ruthann Swanson, an associate professor in the College of Family and Consumer Sciences department of foods and nutrition, is leading the team of UGA researchers who found that peanut skins can be incorporated into traditional peanut butter with potentially surprising results.

“What has happened in recent years is a movement toward healthier products in general, including nut butters, and an increased emphasis on natural products, and the peanut butters that contain some skin particles are perceived to be more natural by the consumer,” Swanson said.

The researchers include food scientists William Kerr and Ron Pegg in the College of Agricultural and Environmental Sciences and James Hargrove, a professor emeritus in the department of foods and nutrition.

“We found we can do this, and people found it to be acceptable,” Swanson said.

The study also looked at skins that had been heated to different extents during processing: blanched (the mildest heat treatment), light roasted and medium roasted.

Swanson’s team tried various levels of peanut skin incorporation, going as high as 5 percent, with no difference from the control samples on acceptability of samples that included blanched skins.

Swanson said the findings suggest a food company could attempt to diversify its product line by incorporating peanut skins into production and could even use them in other food products such as cookies.

Swanson noted that historically, consumers have found the presence of particulates in peanut butter to be objectionable. Also, most peanut butter consumers tend to be very brand loyal, she said, making new products difficult to market.

“This generation does not seem to be as brand loyal and they want products that are closer to their original state,” she said.

Additional study authors are Cloviece T. Sanders and Christa L. DeMasiea of the department of foods and nutrition.