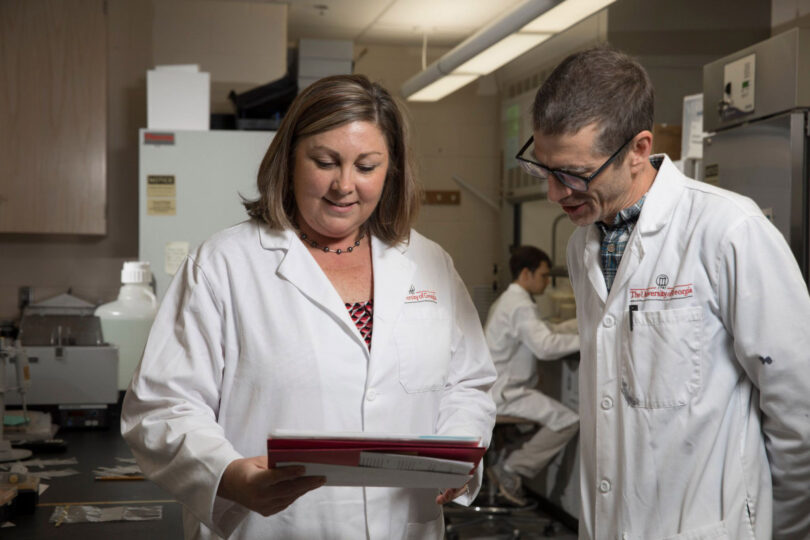 In the past year, the University of Georgia has conferred more than 10,700 degrees, helped bring nearly 60 new research-based products to market, and leveraged its statewide network of extension agents and public service and outreach units to help individuals and communities across Georgia thrive.

In fulfilling its three-part mission of teaching, research and service, UGA generated a record annual economic impact of $7.4 billion to the state of Georgia, according to a new, comprehensive study. Growth in the number of degrees conferred at the undergraduate and graduate levels, increases in externally funded research activity, and an expansion of public service and outreach activities all contributed to this record.

“This latest economic impact study provides further evidence that the University of Georgia is vital to our state’s prosperity,” said President Jere W. Morehead. “Our faculty, staff, students and alumni create opportunities across Georgia that strengthen our economy and our future, delivering a significant return on public investment.”

Information on how individuals and communities can connect with university expertise and resources — as well as estimates of economic impacts at the local level — are available at impact.uga.edu.

The study, conducted by UGA economist Michael Adjemian, assessed the economic activity generated by the university’s teaching activities in the 2020-2021 academic year by calculating the increased earnings that degree holders can expect to receive based on their field of study. Two out of every three UGA graduates stay in Georgia, and their increased earnings contribute to the tax bases of the communities they call home. Out-of-state and international students generate economic impact through the spending they bring to Georgia, and these impacts were included in the report as well.

The demand for a UGA education — measured by the number of applications and the number of students enrolled — is at record levels, as are student success metrics. This fall, UGA enrollment exceeded 40,000 students for the first time in the institution’s 237-year history, with growth occurring fastest in the number of graduate and professional students. Student success metrics at UGA are at record levels, with 88% of students earning their degrees in six years. That figure is well above the average for SEC and peer institutions and is just one percentage point below the average for UGA’s aspirational institutions.

The report noted that the easiest component of UGA’s impact to quantify is the economic activity generated by externally funded grants and contracts for research. According to a commonly used economic impact model known as IMPLAN, each dollar of funding from federal agencies and out-of-state foundations generates an economic impact of $2.08 as those funds are spent in Georgia on personnel and equipment.

In the past year alone, UGA faculty have earned a seven-year contract worth up to approximately $92 million from the National Institutes of Health to establish a center dedicated to fighting the flu and are continuing work on a nearly $20 million grant from the U.S. Department of State to combat human trafficking. UGA faculty are also co-leading a National Science Foundation-funded center to study oceanic ecosystems. UGA’s total research and development expenditures have increased 41% since fiscal year 2013.

Research grants spark discoveries, and UGA continues to expand its innovation ecosystem to help turn those discoveries into new products and companies that contribute to Georgia’s economy. In addition to external grant funding, revenue from the licensing of products and the creation of startup companies based on UGA research contributed to the university’s record economic impact.

For the eighth straight year, UGA has placed among the top five U.S. universities for the number of commercial products created by industry partners based on faculty and staff research. Recent products based on UGA research include vaccines that support the poultry industry, research and educational tools, internationally renowned turfgrass and new crop varieties. In many cases, UGA faculty develop crop varieties specifically for the region’s climate and soils to support established markets, such as peanut production, and burgeoning agricultural sectors, such as citrus farming in Georgia.

More than 200 companies are based on research conducted by UGA faculty, including startups such as biotechnology companies InfraredRX and ArunABio. In addition to supporting homegrown startups, the university’s Innovation District is also attracting companies to Athens, including Texas-based Metropolis. In 2021, the university opened its Delta Innovation Hub, which hosts several innovation and entrepreneurship programs.

UGA’s status as the state’s flagship land- and sea-grant institution means that contributing to the economic vitality and well-being of Georgia citizens and communities is an integral part of its mission.

The university’s eight Public Service and Outreach units help create jobs, develop leaders and address critical challenges. Among those units are the Small Business Development Center, which operates a network of 18 locations across the state that worked with nearly 5,400 clients and helped launch 483 new businesses in 2021.

Another PSO unit, the J.W. Fanning Institute for Leadership Development, launched MENTOR Georgia to expand access to high-quality mentoring across the state. Funded by a grant from the USDA’s Rural Community Development Initiative, the Carl Vinson Institute of Government launched a program to help rural communities develop and implement strategies for economic recovery and resilience. In conjunction with the Provost’s Office, Public Service and Outreach also launched a program to help faculty connect their research and expertise with the needs of rural Georgia.

For this year’s report, Adjemian adopted a more inclusive methodology that also factors in the economic contributions to the state associated with UGA’s operational expenses. Spending on labor, overhead and facilities in Athens and across the state generates economic activity as those funds are spent on goods and services. Major investments in campus facilities include the Interdisciplinary Science, Technology, Engineering and Math Research Complex and a new Poultry Science Complex.

Adjemian found that, overall, each dollar of state funding to UGA generates a $22 return on investment. When combined with the $7.4 billion economic impact generated by UGA’s teaching, research and service missions, the additional $2.9 billion that the university contributes to the state economy through its operational expenses sums to $10.3 billion in economic value in 2021.